Give Me Three Steps 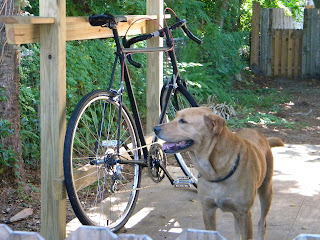 Almost Prolific
Hello Everyone! Surprised to see me? Yesterday morning I lubed up the keyboard and  dusted off the thesaurus and used it for a coaster where I placed my special typing brew. No, not brewski, not yet anyway, I still have thirty pounds to go. But what we have here is a shot of milk in a large cup of coffee along with a healthy dash of Ovaltine for the vitamin factor. They haven't invented Starbucks around here yet so I am on my own and that is the best I can come up with. But by swapping coffee for beer  my typing speed has improved drastically and you should see how neat and precise my handwriting has become.

Cursive Words
I know you think I am kidding but when was the last time you tried to write a sentence in a fine hand? Do it now and if you are like me you will be amazed at how hard it can be. Who cares? Me. As I rapidly age my way into the future I refuse to lose any old skills and I continually try to add new ones...like bicycle maintenance.

Ya Either Got It or Ya Want It
I just ain't a natural born mechanic. While I can take a word or phrase or sentence and wring it around and twist it about until it screams in agony or sings and dances with the simple joy of being, a thing as obvious as correct chain length or derailleur alignment or cable adjustment is completely beyond my ken. I once owned a '73 Chevy StepVan. When the transmission exploded I was proud of my ability to crawl under there and tear the diseased part out, using only minimal cussing and the use of the sawzall. But when I took it to the transmission guy he cracked it open and, like a Doctor with bad news, came into the waiting room to break it to me gently.

“Would you step back here, sir?”

“Why, Johnny? And why are you calling me sir?” I knew I was in trouble.

"It's shot out, Tim Joe, and I just wanted you to see it before I send it out to the scrap pile.”

“OK.” I was already imagining the agony of taking my old ax down off the trailer wall and heading into Miss Massey's woods yet again, hunting down some dead tree to chop up and haul home so I could fire up the Quasitron 6000 Steam-powered Search Engine in order to start hunting for a new transmission. How long, O Lord?

As long as it takes, obviously,  said the Voice.  I take the coffee off the thesaurus.

"Shut up, Voice, I'm being rhetorical."  I put the coffee back on the thesaurus.

I know A Lot About Art, But...
There on the drastically cluttered bench in Johnny's shop was the old tranny. The housing was separated and laid open and I could see what a transmission looks like on the inside. It looked like a one of those convoluted M.C Escher paintings where stairs go nowhere and switch back on themselves. Johnny, still pretending to be a sad doctor instead of the mechanical pirate he really is, pointed gloomily at the inner workings of this incomprehensible device.

“See?” He said. The only thing I could see and make sense of was his greasy and calloused finger and his gnarly old hands that had repaired or replaced at least a half dozen motors and transmissions for me over the years, the same hands that had counted endless dollars that I used to own and would obviously soon be counting some more of the same.

“Uh, yeah. No. See what?” He took on that pseudo-serious manner he gets when explaining the obvious to dolts like me. He learned it by watching the Professor on Gilligan's Island.

“See here where these grooves are cut into...” I had already drifted off to the woods behind Miss Massey's and was wondering if I should get enough wood to fire up the grill after I got the Ol' Quaz up to steam and hunting a new unit for my soon to be departed truck. I could hear the birdsong of the forest and somewhere, far off, the faint strains of Lynard Skynard singing “Give me three steps”...

Sadly, It All Leads Up To This
So the other day I was out on the front porch of my trailer. I had the bicycle in the stand. I had just finished putting everything back together after cleaning and painting and so on and I didn't put the front derailleur on. I never use the small ring up front and that area of the bottom bracket and front mechanism is always the dirtiest part of the bike, so I left it off. This meant that  I had suddenly developed an increased interest in the functionality of the big 34 tooth cog on the Sram cassette that I put on last year. I would need that big gear to climb the bridges around my riding area. But when I tried to shift into that gear the rear derailleur jammed up into the chain. I was convinced (due to all my previous problems with transmissions) that this simple little bicycle tranny (the rear derailleur) was somehow broken and would need replacement.  There  I was unbolting her when my friend Corky came by to borrow a beer. While we stood there drinking two of the same I pointed out my bad derailleur and explained my problem. Bending over for a closer look, Corky gave the chain a tug.

'It looks like your chain is a couple links short. Two or three links.” I immediately flashed to the Gerber baby food jar I had tucked away on my workbench. No longer full of applesauce, it now contained several schrader valve stem caps and a piece of Sram chain, three links that I had removed when installing the chain last year

“Well, Corky... I, well, you know I write a Blog about bicycles and I read a lot about them and I'm pretty sure the problem here is the derailleur. Want another beer?”

“Sure. And what's a Blog?” I went to the refrigerator and got out a couple more frosty Budweisers. Then I casually drifted over to the workbench and picked up the little glass jar with the three incriminating links. Glancing over my shoulder, I saw the Corkster out on the porch on one knee, intently fiddling with the chain and derailleur. I was thinking fast and hard. I quickly unscrewed the cap, plucked out the links and palmed them under my beer. I went back out to the porch.

'Here ya go, Cork. Man! Look at the size of that squirrel!” As he spun around to catch a look at the imaginary giant I dropped the three links on the floor under the rear wheel. Corky turned back to me.

“I guess I missed it.” He looked at me a little more closely.

'Yeah, I guess so.” He looked suspiciously at his beer. He tried to casually look behind me. He and I go back a long ways.

'Well, I guess I'll be going. He chugged the beer and set down the empty can, trying not to make it obvious that he was looking into it for signs of mysterious residue. “Good luck with your bike.”

“Oh, hey, thanks, man. No need to run off. Hey, what's this? I bent down to pick up the three segments of bicycle chain. “ Well, I'll be danged! You were right, man! This must have fallen off when I was putting everything back together!”

Corky looked a little dumbfounded at the thing in my hand. He looked back to make sure a giant squirrel wasn't approaching stealthily from behind. He looked at the beer he had just finished and he looked at the expression on my face and we both bust out laughing. Old friends are the best.

'I guess I'll have another beer after all,” Corky said.

Whispering Pines Trailer Park and House of Mirrors
#81
Posted by Tim Joe Comstock at 5:47 AM