Dumpster Diving
The other day I finally got motivated to do a little work on my old Mongoose Alta. For a couple years she was my only bike and I put a lot of miles on her before I got the Schwinn from Coyote and rediscovered the beauty and the wonder of big skinny tires and gears and the sensation of flight that they impart. After that the Goose mostly sat in the corner collecting dust. I would ride her to the beer store once in a while just for old time's sake, but she felt sluggish and slow compared to the Schwinn. But the other day the Blonde found a bicycle carcass in the Park dumpster and pulled it out for my inspection.
Derelict
It was a sad kind of thing. The frame was brand new. It was one of those low-end comfort bikes they sell at beachside bike shops for weekend riders to use to cruise the boardwalk. It was a single speed, of course, and thoroughly stripped of wheels and chain and seat. All that was left was the frame and fork and handlebars. I put it in the corner with the Mongoose and more or less forgot about it until one day I was straightening up the shop and there it was.
Its a stolen bike, said the Voice.
“No kidding, Voice. What of it?"
It's a stolen bike so you should give it to the cops. The serial number is right there on the bottom bracket.
“Voice, that is a noble intention but you forget: we live in the crappiest trailer park in town and those cops will wonder what happened to the wheels and tires and chain and so on and furthermore, O Noble Voice, perhaps you forgot that here in the Living Room Bike Shop there are many bicycle wheels, tires, used chains and various other parts that might cause suspicion to be cast my way. Duh.”
No, YOU duh. But you're probably right. So what will you do with it? I had not considered this question. In fact, it just occurred to me that I had a probably stolen and definitely stripped and serialized bicycle frame stashed in a room full of bike parts.
“Here, Voice. Take this thing and put it back into the dumpster. I don't want anything to do with it. It is a Tainted Thing. I have spoken.”
Have spoken all you want. I am only a voice and so if that poor derelict is to find its way to the trash heap it will be your problem to make it so. Thus speaks the Voice.
Ashes to Ashes
Stupid Voice. But as usual, the Voice was right. I guess. I pondered further about taking it to the Cop Shop but finally said to hell with it and threw it back from whence it had come. I was crafty; I waited until Wednesday morning to do the disposal. The dumpster guy comes on Wednesday so there would be minimal exposure. I didn't wipe off my fingerprints because it seemed ludicrous to do so...but you never know. I then went on about my day and forgot about the episode, pretty much. I did make note of the sound of the dumpster truck doing its job later that morning and I do remember thinking to myself, “That's that,” and then I went for a Town Ride.
When I came back to the trailer a couple hours later there was the same forlorn frame leaning up against my gate. It looked like it was scratching to get in the same way Toby the Trouble Puppy scratches to get out.


It doesn't count as an ordeal if there is a new tool in it.


Whispering Pines Trailer Park and House of Pain
#52
Posted by Tim Joe Comstock at 11:49 AM 23 comments:

Roseanne, the Zombies and the BUG

Hack Hack Cough Cough
It has been rather cool here in East Central Florida for the past week and I managed to contract one of my dreaded every-other-year colds that tend to put me on the skids for a couple days. When this happens I bravely face my illness with as many potions and powders and pills as I can get my hands on.  My goal is to survive through over-the-counter induced coma. I pile books next to my bunk, add blankets to the pile and say my farewells to my dogs and my woman and then crawl into my nest to meet my fate.
Trailer Park Benefits
We don't have a Health Plan here at the Park; in fact, if anything, it would have to be called an Unhealth Plan. Besides, I am far too bold and manly to report to the hospital for a mere chest cold. Not me. What I do is take a bunch of pills that look vaguely like Christmas candy, drink syrups that taste like nothing else in the world and then spend two or three days catching up on my reading, sleeping and alternately whimpering for mercy and howling for more soup or orange juice or whatever else enters my feverish head.
The Bad English Patient
The Blonde is always very indulgent for the first couple of hours. Once she realizes I actually do have an illness and not just a more worser than usual hangover, she suddenly remembers a bunch of errands and shopping she forgot to do and then disappears for the next couple of days. She ain't no Florence Nightingale, but I admit that I am the worst patient in the world and if we were Eskimos, there would be an ice floe somewhere out there with my name on it.
But that was three days ago and now here I am, typing merrily away with only an occasional rumble in my chest and that delightful sniffle thing that doesn't warrant an actual nose blowing but makes you snert and sniff and wish for warmer days.
Irregular Programming
As an inveterate Bicycle Nerd I hang out at a Site called Old Ten Speed Gallery. Over there we are like those guys in High School that really did believe that Esperanto would one day be the One World Language, instead of Klingon. But our language is bicycles and OTSG is like that saloon where everyone knows your name. In the course of yacking it up about an old Schwinn Caliente a frequent contributor mentioned that Roseanne Barr and John Goodman are appearing in a pilot episode of a new TV series. This time the plot centers around life in a Trailer Park.
I know what you are thinking. You're thinking “Hey! Trailer Park Cyclist! You live in a trailer park!”
Or maybe you're thinking, “Esperanto? What's that? Some kind of soup?”
Or, “ Remember when this Blog used to be cool?”
Hold on. I have to blow my nose. Did I mention that I have been sick?
Hooray For Hollywood
So anyway, these Hollywood big shots are going to try and illustrate in a touching and humorous manner what I live with everyday. They will get it wrong, of course. These guys are so far removed from this layer of strata that they can't even imagine what really goes on. Me, I came to trailer living late in life, as many do. But most of those other elderly trailer dwellers have sold their homes up North and came here to live in pretty nice trailer parks with golf carts and swimming pools and clubhouses where they all get together and do all that hokey crap that you do when you retire. Whatever it is. I don't know. I only say it is hokey because I went to one of those places once and in the clubhouse there were a bunch of people only marginally older than me actually doing the Hokey-Pokey. No, really.
The Whispering Pines isn't a retirement trailer Park. It isn't a place where elderly people come to hang out until, You Know. I guess those big fancy retirement parks are like luxurious ice floes.
Zombies!
The Whispering Pines is more of a place to come and not wait for the Big Sleep, but rather to embrace it.   Most of the people here are pretty drug-addled. The advent of these super-strong downers like oxycontin or whatever it is has created a new American Class. While the middle class is shrinking, we now have the Rich, the Poor and the Zombies. Government subsidized medical programs are shoveling these Zombie Pills into the eager maws of the impoverished like Manna from Hell. I see it everyday. The sheer volume of these pills is unbelievable.
I don't expect to see a lot of Zombie episodes on Rosanne's new show, but it would be pretty cool if there were. In fact, unless I break down and buy a TV, I probably will never even see a single episode.
This is all a little depressing. Probably aftershocks of the meds I took for my cold. Did I mention...
Meanwhile,  Back At the Bicycles...
In the world of bicycles, frequent commenter and Horticulturizing Cyclist Dee was kind enough to answer my query as to what she has been up to Down Under: 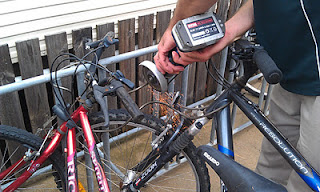 To: Trailer Park Cyclist:
In my copious spare time I am the president of the James Cook University Bicycle Users Group. A couple of years ago the Uni got a new high tech central cooling system, and all the old individual cooling plants were set to become redundant. The cooling plant for the library was housed in this great little building I had always liked, so I contacted my facilities management people and asked if it could become a bike shed when the old plant was removed. To my surprise and eternal gratitude they thought that was a great idea, and they spent a lot of money to make it happen. It needed a new concrete floor, and a roof (I guess it never had a full roof before) and they partitioned off a workshop and added lockers. They wanted to add showers but there was no plumbing available. I almost lost the project at that point because they figured if I couldn’t have showers I wouldn’t want it, but they were so wrong!
Anyway, many meetings and good will later it is all happening. Took us a fair time to get the community bike shop concept going, because it needs volunteers. I got tired of waiting for interested people to come together and went out with another employee and gathered up all the abandoned bikes at the colleges and put them in the shed, and now lots of people are really excited to have bikes to play with, and the workshop is starting to take shape. 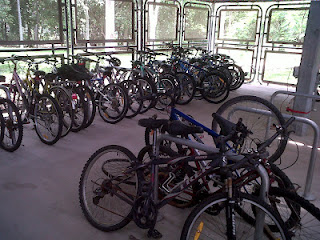 O-week is next week, and we will be selling cheaply anything we get fixed by Wednesdays market day. As for the rest, I figure I will invite students to choose a bike, join the BUG and do it up to keep for free themselves. I just love all this. I am a terrible doer.
But NOT a terrible Zombie.  Good work,  Dee!  JOIN THE BUG!
That's it for now.
Whispering Pines Trailer Park and Hack Attack
#51
Posted by Tim Joe Comstock at 7:21 AM 12 comments: