Did I Mention That I Have Been Off...the Bike
Man, it has been a hell of a no-ride ride getting through the end of summer in Florida and the total rebuild and painting of my Old Schwinn le Tour. No riding for me is usually accompanied by extended periods of increased sloth and drunkenness. I did that but also there was an unexpected rush on trailer rentals which means suddenly it is up to me to get the derelicts ready for occupancy. Not the two-legged derelicts, I mean the ones on wheels although there are plenty of wheeled derelicts here too; perhaps that sounds insensitive but come down and spend a little time in the trailer park and you'll go home as politically incorrect and hardened as I find myself becoming.

And So:
A little time on two wheels usually softens me up but instead I have been hacking away at these beat up old trailers and meanwhile scratching together the scratch for a little pile of bicycle parts and accoutrements to spruce, paint, rejuvenate and ready the Old Girl for new adventures and some extended mileage. Bear with me while I reminisce over the last few weeks of bikework. There will be a lot of pictures, so feel free to skim. 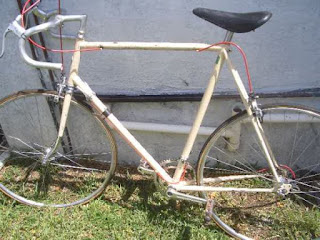 My friend Coyote brings by a Sad Derelict looking for rescue.
I had little interest in those "skinny tire" bikes;  my belief was that a sturdy mountain bike was more suitable for the kind of Urban Bashing and Beach Cruising that I liked to do;  it was obvious that this fragile little dragonfly would not serve my needs.  But Coyote is an old friend and he only wanted twenty dollars.  I had stumbled across this "fixie" thing online and thought "Maybe I can build one of those" even though I was only vaguely aware of what a fixie was and had no idea what I would do with it.

Then, Just Like That...
I got some degreaser and some new 27" tires and tubes and did my best to get her up and running.  If anyone is interested, you can go back to the earliest pages of this Booger to co-experience the crazy days of my beginning to learn about fixing bikes.  FIXING bikes, not FIXIE bikes.  I still don't know anything about those things.  But after a while I got everything together in some kind of primordial fashion and went for a ride.  WOW.  Suddenly, I had discovered flight!  Swift and sure, this bicycle tracked like it was on rails.  Soon I found myself tearing along country roads in a way I never knew existed. I was hooked!

The Forums, the Late Nights, Poverty Vs. Parts and the Joy of FedEx
Well, that title says it all, does it not?  I was instantly swept up in the fever of studying into the wee hours of the morning, reading about all things Road Bike.  I drooled over derailleurs and contemplated cleats and yeah and verily, I do now confess that carbon was one of my desires. Yes, all things carbon were coveted by this impoverished near-derelict sitting in his dilapidated trailer, staring deep into the screen, unashamedly hooked on bicycle pornography.  How dare I consider these exotic bits and pieces, many of which I did not understand the use of, and none of which I could afford?  I needed a motor for my Big Truck, did I not?  Then it happened.  The Blonde, in a moment of inspiration, brought home from somewhere a big orange and black FOR SALE sign.

"What are you selling, my dear?" I asked.  I was experiencing a tiny hint of apprehension.
"Nothing.  I thought you might want to sell the Big Truck."
"WHAT?!  I've had that truck for twenty years! She was Once Lost and then Found!  I've put four different motors in her and I'll be damned if I'll ever let her go! Are you insane?"

She is not.  I have always made it a planned thing in my life to have one clearly sane person close to me so that I don't have to be.  It can be a hard chore for the sane ones, but they seem to stick around all the same.You can read all about it here, in a post I wrote called Big Trucks Go, Big Trucks Come.  But this is what my beloved Big Truck looked like. 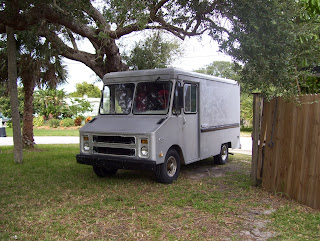 Man!  I loved That Truck!
The guy that bought her got scammed by shady mechanics and she still awaits a new power plant.  I fully expect to get her back again one day.

How To Mend A Broken Heart (And A Bicycle)
The proceeds from my heartbreak went to pay some much-needed payments, but I managed to set aside a few bucks for bike parts and a workstand.  I got a few cans of paint and some specialty bike tools and got to work.  The end result was quite satisfying and so, armed with a modern 700c rear wheel and new drive train I was extending my rides Way Out There,  riding farther than I thought realistic and eventually I found myself getting sorta-fit and doing all-day rides that took me past the dreaded-yet-desired 100 mile mark.  I was a Real Roadie at this point, I thought.

More thought than miles,  said the Voice.
"Voice!  You're back!  I thought you weren't talking to me anymore!"
I'm not.  But someone has to monitor your Blogular un-poetic license.
"Whatever.  And shut up, I'm trying to reminisce without booze."
At least I don't have to watch you cry and type at the same time.
"Hey!  That's not...that was Joan Wilder, not me."  Stupid Voice.

So Anyway
The mid-end result was a pretty roadworthy little vintage Schwinn.  I put a lot of miles on her, had some adventures and even flirted with the Big Time. A visiting dignitary provided us with the only existing photo of Me Little Darlin' during this phase of her ascension: 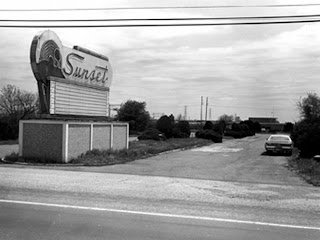 Whoops!  How did that get in here?  That's the Old Drive-in Movie theater in my home town where I lost something back in 1972.  Can't remember what it was... 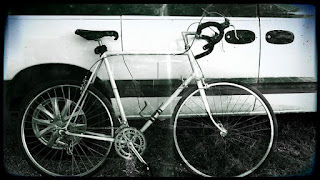 There we go!  You might note that she looks a little more capable and perky than she did in the previous "before" picture.  Black and white, also, like the drive-in photo.  I wonder why those went out of style?  They made for some awesome Saturday nights.

Let's Wind This Up, said the Voice
"Okay, Voice, Okay.  Sheesh!  Whose Booger is this, anyway?"  So anyway, after many happy miles I began to detect noises that made me wary of getting Too Far Out There.  This occurred at about the same time I started to think about overnight camp rides, something where I could go sixty or eighty or yes, even a hundred miles out, spend the night in a new place, then ride home in the morning.  Or not.  Maybe go another leg of fifty miles or so and spend the night and then finish up the next day.  ( I realize that I have employed some questionable geometry in this fantasy, but hey, that's what fantasies are for.  Pretty much.)

Rock and Roll Show
Creaking and groaning noises from the bottom bracket and highly questionable brakes and tires and frayed cables and rust didn't fit into this fantasy all that well, so, following on the heels of yet another minor infusion of cash,  I ordered up a pretty fair pile of parts.  One night, in anticipation of FedEx,  I took a few parts off the bike in preparation. It felt good.  I liked it. So... I took a slug of rum, a follow-up slug of beer, locked the Voice in the bathroom and took the whole bicycle apart.  I took it down to bare frame, got out some sandpaper and started sanding.  Over the next couple weeks I worked my way through a few (4) bottles of rum, many (100) (a century!) bottles of beer and two (2) packs of varying grit sandpaper and six (6) cans of flat black Rustoleum.   I listened to a lot of Classic Rock,  I danced a little and  I switched to cheap wine (3) (jugs) and kept going, polishing parts, cleaning the chain and cassette and the derailleurs and brakes. Everything went really slow and with great deliberation.  I wanted it to last.  I was having fun, man!  I polished rims and sprayed and drank and received parts from the United States Postal Service (remember them?) and the FedEx truck came three (3)(!) times and a Loyal Reader even pitched in.  I fretted and worried and then, when I went to let the Voice out of the bathroom he wasn't there.  I shrugged my shoulders, went back to drinking and polishing and assembling and cussing and then,  just like that, there she was: 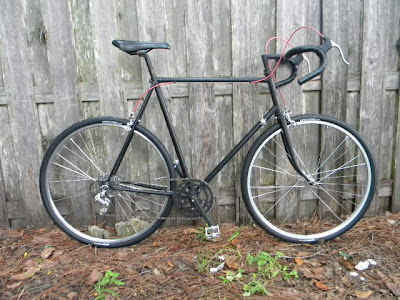 I'm Not Political, But...I Can Dance


There's No Excuse
Hey!  My bike has been down for a full-blown rebuild and paint job and the weather around here has been weirdly wet and all that equals No Riding which usually means I compensate by doubling my already prodigious alcohol intake and the blurry keyboard makes composition difficult...

I Blame Mitt
Plus the election brouhaha nonsense is making me crazy and I have been listening to National Public Radio at work which usually leaves me suicidal by quitting time.

How I Spent My Summer Vacation
But the future is bright!  Tomorrow the Old Schwinn will be finally ready for a photo shoot even if I ain't:  a month or so of no riding has left my ass as wide as a, uh,  wider than a,  wait...well it got big and a few days ago at the end of a six-day weekend involving whiskey, beer, really cheap wine,  store-bought pizza and wings and peanut M&M's and lots of broken glass, in a moment of despair over my Lack of Style  I decided to give myself a haircut.  Now my dog barks at me when I come into the trailer and then, to make matters even more worser,  I accidentally, (while trying to perfect some new dance that is all the rage in Korea or France or one of them places),  lost my balance and stepped on her tail and so she packed up  her things and moved back in with the Blonde.

Lonely is the Haunted
Enough is enough:  the dog is gone and the Voice ain't talking to me and the bike will be ready and I really, really need to get back on the Road.  Until then, my  friend George Hahn put this up on his site today and I promptly stole it.  Here it is:


So until I get some miles under me and something bicycle related to tell about hang in there:  my recent decline was actually all about missing Interbike this year and when I pout, I can really pout.