Robot Chickens
It was probably around 1979 and I was standing down at Mallory Square in Key West with the rest of the misfits and tourists watching the sun go down and tippling from a sneaky flask of rum when this bedraggled dude in long cutoff jean shorts and no shirt or shoes and hair way down his back came cruising up on a red bicycle of indefinite pedigree. It had Stingray handlebars and a straight diamond frame and it was a single speed and the dude was standing erect on the pedals and the high handlebars allowed him to be erect and somehow noble as he cruised up to the scene; this monster circus at sundown that was Key West back then, back before it got Disney-fied and hyper expensive and now there are cruise ships and I even think the chickens may be mechanized or robotic; who can tell?

But this bicycle caught my eye because it was a Stingray, really, a grown-up Stingray (although grownups were scarce in that milieu in those days, we were mostly there on nefarious cowboy business or just there to drink, hard.) But that big kid's Stingray caught my eye because of the way that hippie/pirate was cruising up to the pier and the color red and just..in the ambiance of the moment and my substance-stunned state of mind I flashed back in time to my first bicycle, my first REAL bicycle, a custom something chopped into the 1962 version of what would become perhaps the most iconic bicycle in American History: the Schwinn Stingray.

Crazed
In those Key West days I was caught up in the ten speed craze and rode god knows what; Walmart wasn't around then and if it was I didn't know about it. We got our bicycles from Sears, probably, but my ten speed was just some bicycle I picked up somewhere for five or ten dollars. All I remember is that it was gold. I didn't ride that much. But all my life I have had only a handful of times without a bike. I have always had a bicycle. If it got a flat it sat in the corner until some benevolent soul came along and offered to fix it. I was into cars and motorcycles then and a bicycle was...I don't know what. I just always made sure I had a bicycle.

But years later I became something of a bicycle genius (Hey! No laughing!) OK, I learned a lot more about bicycles and became a cyclist and a slayer of sorts and bragged about it on and on and on on here and always there was that image, that pirate bicycle back in the glory years when I was cool (hey! I said no laughing!) and life held promise and I remembered that guy on that big Stingray. Being slightly more knowledgeable than I was in '79 I pondered on this and stared at my old '93 Mongoose Alta and then one day, lugging a big bag of empty liquor bottles and aluminum beer cans to the trailer park dumpster I came across a derelict comfort bike and it had BMX style bars and I grabbed them and put them on the Goose.

They are still there. The Goose, eight years mine now, has achieved the look of a Stingray and as I type this, I realize that my “ten speed,” Me Little Darlin', my '81 Schwinn Super Le Tour, is sitting in the corner with a flat rear tire.

I Didn't Do It
Guilt is a funny thing. It hits you from all sides and it can cripple you, it can blow you asunder and make you feel like hell. We all know it, this guilt, we all know that it is all our fault and we don't deserve to live and the world would have been better off if we had never been born. Inanimate objects and beloved pets will really kick your feet out from under you. Here's why: we can argue with our kids and spouses and bosses, we can lay down seasoned lines of reasoned thought that clearly show that we are right and if that fails, we can resort to shouting and violence and let the cops and the lawyers sort it out.

But an anthropomorphisized bicycle or goldfish don't get it. They don't understand and they only know that their water smells like pee and that they have a flat tire and why won't you fix me and at least ride me around the block?

I may be losing my mind.

I Have Custody
Toby the Trouble Puppy and Miss Daisy the Yellow Dog are with me here at the Park for a couple days. I have visitation, it seems. The Blonde and I didn't split up, exactly. We just live in different places now. Because of my extended time out of town working, the dogs stay with her. But they are with me now and in true Weekend Dad fashion they are being spoiled horrendously, steaks and dog treats and so much belly-rubbing and ball tossing and benadryl-laced macaroons that they might as well be staggering along the pier in Key West a vast long time ago.

Toby is some kind of Jack Russel-Pit mix and given to the shivers. He has found one of the few patches of sunlight in my deeply shaded yard and rests there now in this cold Florida afternoon, a sweet little patch of chilled sunshine with warm dirt and a big fern shading his gaze. Miss Daisy, an elderly Yellow Lab who has been with me since she could fit into the palm of my hand, is back in her favorite place: curled up at my feet and listening to her old favorite noise of a clicking keyboard and antique jazz.

Meanwhile
Me? Hell, I'm not losing my mind, I'm finding it. I'm working my way back home to those days when all it took was a sunny afternoon and my old Stingray, the sound of my breathing as I pedaled standing up across little hills and open fields, headed nowhere, headed here; headed to that place where we have sorted out our crimes and our guilt and our sadness and our joy and all of it, all of it, is just a shadow in the sunshine.

So Anyway
Later, soon, I will jump on my big-kid Stingray and pedal fast to the store for more beer. Little Miss Dangerous will get her tire fixed, soon enough; but right now I am back at work and it ain't easy and it interrupts my search and so, now, I grab my fun wherever I can get it. I will grab my fun and I got just the bike to do it, I have the bicycle for the job. 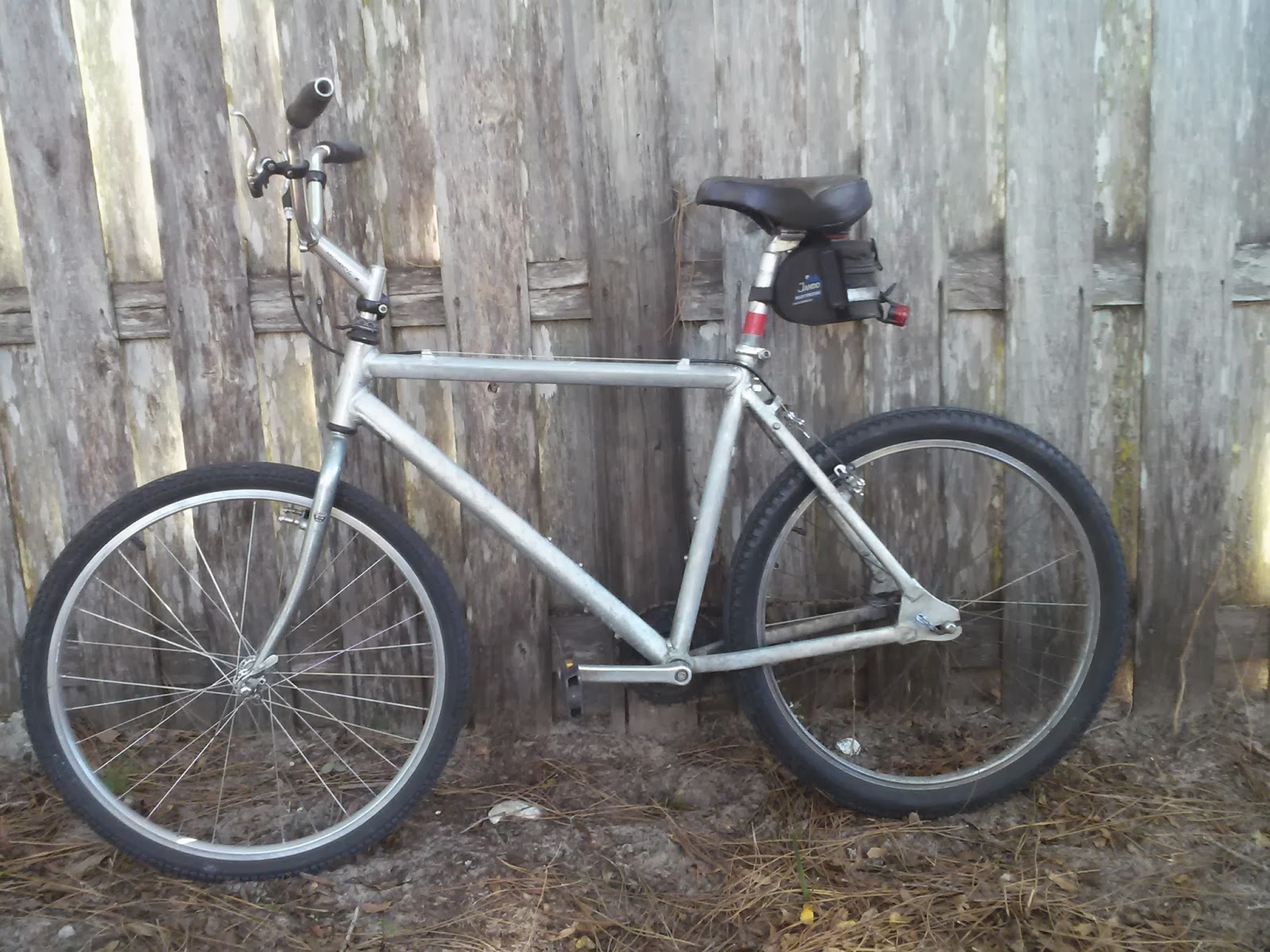