[A Note from The Trailer Park Cyclist:  My computer sorta crashed yesterday and only runs in 30 minute bursts,  much like myself.  So one of the Original Followers of the World-Famous TPC has Helped Out by donating a Guest Post about What He Rides and Where He Rides It.  Thanks, Ryan!]


A Bit of Background
Tim Joe was kind enough to ask me to write about riding in Seattle. I am a 40ish dude who likes to ride Steel Road Bikes and recently have been bitten by the Old 10 Speed bug big time. My current daily rider is a 1979 Miyata 912  .  I ride to commute and run errands but mostly I ride to put a smile on my face and clear my mind. When the TPC suggested writing about Riding in Seattle a hundred ideas flooded into my head. I could write about the 38 mile Burke Gilman Bike Path, or riding around Lake Washington, or the video-game-like quality of riding the Bike Lane on Second Ave in Downtown at rush hour trying to get home in one piece. And then I remembered a nugget I have heard often about writing, Write What You Know,  and what I know most about is riding in West Seattle where I live and where most of my cycling happens.

Myth Busters
First of all I need to dispel a myth about Seattle. People have the impression it always rains here and frankly we encourage that impression because we don't want everyone moving here. The exaggeration reached a peak in the movie "Sleepless in Seattle" when the character of Meg Ryan's brother says "You can't move to Seattle it rains 10 months of the year out there!" I mean c'mon 10 months! Really? That is so absurd, it's gotta be like 9 months tops.

Start Off Easy Then Add Gravel
My regular loop is not epic in distance, about 12 miles, but it does have quite a bit of variety. I like to start with a gentle down hill for the first mile or so to let the legs warm up, and then I duck into Lincoln Park to ride the gravel for a bit,  it's fun,  scenic and a bit of a skills course. I like to think of riding on gravel like being in a constant "Tokyo drift";  it takes getting used to but now when I hit an unexpected gravel patch on the road it doesn't feel weird to me. Also my tires are usually softer and wider than the standard super hard and skinny 700x23c which makes it easier to ride the gravel. 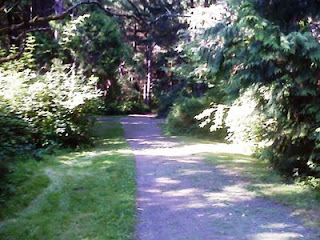 Out of the Woods and Around the Potholes
Once I exit the Park it's  back to pavement, well sort of pavement anyway. It’s a combination of 50's concrete slab (joints every 15 feet or so) and crumbling pavement rife with potholes, like riding Swiss Cheese in sections.  In one particular short descent the pavement is so rough I have lost count of the number of water bottles and clip on tail lights that have ejected from the bike while I bounce down the road at 30 mph. There are, however, a few spots that have been recently paved and when I go from the rough feel of chip seal to the smooth new pavement it is hard not to give out an "ahhhh" for those 30 yards or so of calm Asphalt Bliss.


Hipsters and Tourist and Babes -Oh My!
About mid ride I hit Alki Beach which is a stretch of road with Restaurants and Shops on one side and the Beach and Puget Sound on the other. It is reputed to be where the first Seattle Settlers landed and, I think, has some of the most beautiful views of the area. In the summer it's where the cool people hang (and the occasional Clydesdale Cyclist on an old 10 speed)  and with Beach Volleyball and girls in bikini's and people crusin' the strip its like a little slice of SoCal. While there is a very nice bike path along about a 4 mile stretch here I keep to the road. In my experience cars are more predictable than 5 year olds on razor scooters, and while having a close up with a car would be unpleasant, inadvertently hitting a little kid who has u turned in front of me would be unthinkable. And don't even start me on the Mom's walking two abreast on the big path with mega-strollers talking about their relationships and simultaneously texting.  In the summer months the road traffic is moving slowly enough I can usually keep up and the rest of the year traffic is pretty light, so I stick to the road. If I am lucky sometimes a Regatta breaks out on the Sound while I am passing through. 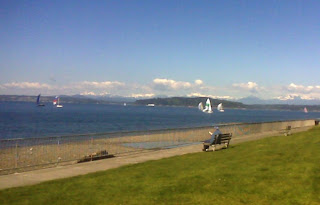 After negotiating the Alki strip I round a point and get a great view of the City Skyline and      Elliot Bay.   I also pass a rather industrial area near the Port of Seattle and my view is reduced to a forest of cranes but it’s a small price to pay for the wonderful view of the City.  Salty's Restaurant on this stretch of the road boasts that they have the best view of Seattle from their tables and I would have a hard time arguing with them. I also like to use this part of the ride to get into a nice easy rhythm because its about time to Pay the Piper. 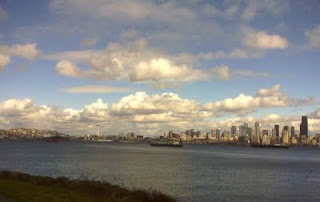 What Goes Down Gets to Climb
One thing about West Seattle is that at some point you are going to be doing some climbing. We aren't talking the Alps or anything but on this particular loop I climb for about one mile in the 4-6% gradient range toward the end of the ride. It's not Epic but it usually tests me a bit and reminds me to spin smooth and steady and relax so I don't end up huffin' and puffin' like the big bad wolf by the top of the climb. And on a clear day I even get a peek of Mount Rainier on the way up.


Coffee? Did someone say Coffee?
Another thing we are known for here in the Emerald City is Coffee, and Yes We Love It and Yes I Am An Addict. I was thinking about the number of coffee shops I go by on this loop and came up with ten and only two of  those ten are a National Chain sporting the Mermaid logo. And I am not talking about Café's or Bakeries that also serve coffee,  we have those too.  I am talking about Dedicated Coffee Shops.  So at any point in the ride that I am jonesin' for my caffeine fix I don't have far to go to get it. And for the post-ride or mid-ride beer stop there are also Four Pubs and a Tavern along the way.

You Call That a Ride?
Don't get me wrong, I love to get out and go for longer rides and Explore New Places and I do so as much as I can, but with a wife, child, mortgage, yard, job, bike projects, blah blah blah sometimes it’s a ride of under an hour or no ride at all. I don't know about you but I will take an hour on the bike over zero any day.


Thanks Tim Joe for letting me ramble on about Seattle and to the TPC Nation - Enjoy Your Ride. 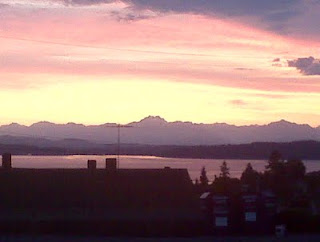 [No,  Ryan, it is Me that has to Thank You!  What a great post and someday I would love to come out and ride your Cool Loop with you!  TJ]