A Visitor From the High Country

Disclaimer
As some of you may have guessed, the TPC ain't always a Socially Acceptable Animal. And I don't mean just in High Society; there's plenty of High People all over the place here at the Whispering Pines Trailer Park and Animal Preserve. What I mean is, I Ride Alone. Not because I smell bad (which is possible) but because I am the Only Roadie I Know. I see Group Rides out there and I have been known to stalk the occasional Stray Phred, but in My Isolated Reality it is Me My Ownself, pedaling away, Desperately Seeking Refuge in the solace of Endorphin Rushes and Bunny Hops Over Road Kill and the certainty that if I ride long enough and hard enough I will receive an Epiphany of Enlightenment and Revelation that will transport my Long -Tortured Soul to the High Country of the Sweet Climbs and New Blacktop that is the Valhalla of We the Two-Wheeled Seekers.
Hold on a second. I need to re-read that opening paragraph.
Wow.

Who's On First?
I wish I could write like that. Wait. I just did. But not really. Like the Best Ride You Ever Took, Telling the Truth is just a thing I Do In Passing, on the way to getting to the other kind of Rush I get by Riding Hard and Fast. I have the honor of Spilling the Beans here on this Blog about the Dirty Little Secret of Cycling: Anybody Can Do It and it is a lot more fun than some of these guys make it look.


You don't even have to wear a helmet if you don't want to.

Did I Just Say That Out Loud?
OK. Everyone calm down. Like Kurt Cobain said: I Swear That I Don't Have A Gun.
But look how that turned out.

Visitor
Today I rode with a Fellow Booger and one of those Boondock Saints you bump into when you least expect it: Karl Allen Ziegler, the Swell Guy. Here's how it went:
Karl, sent to Florida on a Top Secret Mission for the Government of Latvia, needed my services as an apparently delusional Cycling Super Hero of shabby demeanor.
No, that ain't it. Gimme a minute. Oh Yeah:
Agent KAZ of the United Underground Organization of Boogers and Hay-Bailers was sent by the Higher-Up Echelon to recruit the World Famous Trailer Park Cyclist to save the Latvian Orphans...
That may have been it but I have never (for the record) been to Latvia. I think.

Have You Any Grey Poupon?
The truth of the matter is simple: My Internet Buddy and Blogging Colleague Zig had a business run to Orlando.  He set aside a few of his highly precious hours to come by the Park for a ride. Look, I wasn't always poor, but I might as well have been. So when a dot. com industrialist like this guy pulls into the Trailer Park in his Limo to check me out and go for a ride, I Go For A Ride.
Now, it didn't start with a ride. First we ate caviar and drank champagne and I briefed Agent KAZ on the Facts of Life. Let's face it: I am, after all, the Trailer Park Cyclist, Friend of Man (and Women),  King of Beers and a Pundit of Ill Repute. The Facts of Life are, to me, just another briefing. But then things got interesting.

This Is All Top Secret
“Agent Tim Joe, sir,” said Agent KAZ, acknowledging my Senior Agent status in spite of his dot.com wealth. “There have been reports of Slow Riding and Phred Stalking coming from this sector and Snob sent me down here to sort things out and confirm that you are on the job.”
“Whatever, Ziggy. Saddle up and tuck it in and let's go for a ride. I'll brief you on my Work Thus Far; that is, if you can keep up. And for Lob's sake, if we come across any other cyclists, drop back. That $6000 piece of crabon you are riding will blow my cover if any Nu-Phreds should be out there playing hooky from their day-trading jobs.”
The Swell Guy, in spite of his initial Awkward Normality, proved to be a Good Agent.
“Yes, sir”, he said.
That was easy, said the Voice.
“Shut up, Voice,” I said. “He bought the beer.”
This All Really Happened
Now listen: Like I keep trying to tell everybody: I ain't fast, as far as I can tell. I'm a Clydesdale and a Beer Drinkin' Fool and I only ride bicycles because it is the Most Fun Thing I Do. So when one of these Really Fast Guys drop by for a ride, I usually change my underwear, Slam a Couple Beers and then go out and give them what they came for: a chance to humiliate a Poor Little Old Man (me) who can't Keep Up.
That doesn't always work out the way they planned.
But in the case of Karl Allen Zieglar, it worked out just fine. He let me set the pace, he gave me a little schooling on how to drop into a pace line, he encouraged and helped and smoothed my ride and made me glad that he was there.
We Pause For A Soliloquy
The world can be a lonely place. How often have any of you found yourselves feeling a little alone and downtrodden in a room full of people? Well, I have and in case it happens to any of you,   Take It From Me: putting a lamp shade on your head and moon-walking over to the keg just won't get the laughs you think it will. And if it does get a lot of laughs you probably want to get out of there fast. What does this have to do with today's story? Everything, sort of. Let me explain.
Uh...well, I know there is an explanation here somewhere but I dropped it and it rolled under the refrigerator so you'll have to figure it out for yourselves.

Back To The Here and Now
Our ride was brisk and enlightening. We talked about a lot of stuff. We rode the trail of my Cervelo Guy story and down along the River. I kept hoping something spectacular would happen so he would have a Big Story to tell his coming grandchildren in his old age. And in a way it did. We were having a couple After-Cheeseburger Drinks in my trailer. The sun was glowing magically across the highway, sending just the right amount of September warmth and light into the room.  A gentle Florida sun-shower rattled the roof and  awnings and cooled and cleansed the afternoon air.
“Tim Joe,” Karl said, “This has been a great day. I really hope we can do it again sometime.”
“Oh yeah, Karl, it was great and thanks for everything. But...what if we never meet again?”
There was a moment of silence. There are very real and solid reasons why I say stuff like that. As a Senior Agent and Pundit of Ill Repute, listen up, gang: Ya Never Know. Twist the Lime and Get the Juice. Ya Really Never Know.
Here's One From the Heart and The Park
This one is for you, KAZ! I hope you will always Remember the Ride: I hope you will always remember how All our Winds were headwinds that day and how well we ignored them! I hope every ride you take (on two wheels and in your life) will be sweet and that the Wind You Ride will forever be at your back; But most of all I want to thank you for being my friend.
TJ 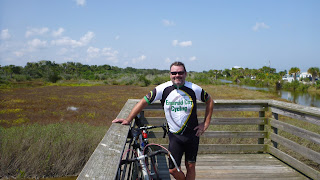