Cromwell Gets A Bicycle

The Doldrums
Miss Daisy the Yellow Dog and Toby the Love Puppy are trying to get a grip on this their new reality: they have their own fan. They have their own dog fan, a sweet little unit I picked up for a measly twelve dollars. It is one of those cheap square box fans but it is set on High here in our sultry Old Hawks Park in my not-air-conditioned mobile home/barn; they just cannot believe their luck and Toby, an amateur yodeler, has already learned that howling weird noises into the blades of the fan results in all manner of fun sounds that cause Miss Daisy to run outside and hide under the trailer.

For What It's Worth
Such is the life of the Trailer Park Cyclist. Simple pleasures and dog tricks; carpentry and drinking and just getting by in these doldrums of the sorta-post recession and a recent Presidency that will leave all of us, I think, saying “What was that? What just happened?” It may have been an example of don't let the Right Hand know what the Left Hand is doing but I will take it, these doldrums. The absolutely unbelievable stupidity and ruthless cruelty of the crew before this one leaves me weary and old and fearing for my future, sometimes...I'll take a boring administration anytime over a war mongering idiot and a supporting cast of Cold War leftovers.

And yet: guess who's coming to dinner. No, he ain't black, we already did that: he is uber-white and the true scion of this weird Skull and Bones dynasty that didn't exactly ruin everything, but not for want of trying. And yet, having lived under his governorship with no complaints and faced with the other dynasty out of Arkansas I will, pending the debates, make mine Jeb.

This page is not, usually, political (that's a bald-faced lie) but I have a lot on my mind right now. For one thing, I am old and feeble and I am supposed to be doing my Captain Ron routine somewhere South of here and on my way to work each day I pass the anchorage and there they are; the sailboats. But I know the truth about sailboats and I also know I am too lazy to bother with getting in a boat and risking my life just to get to a new saloon. I live in a tourist town and there are plenty of watering holes around here that real sailors can't wait to get back to from some crappy Carribean Island where beers cost twice as much as usual and if you can afford to buy enough beer to get arrested you will find out that there are no bail bondsmen and the Embassy has an unlisted number.

As Always...
But what about bicycles, you ask? Even if you didn't, I'll tell you: this afternoon I assembled a Bicycle Shop Warehouse bicycle for my old friend Cromwell. The first thing I did was motor up to his pottery shop in my antique Ford pickup truck. I drive nowhere except for work, but I had my Park bicycle work stand in the back and Cromwell, ever a sucker for flash, was impressed that such a device even existed, needless to say that such a one as me might actually own one. But that is the nature of me and Crom's relationship, however tenuous it may be; for example he has never visited these pages, even though he knows all about them...maybe. But enough of that. Instead, let me tell you about the Motobecane hybrid he bought and I put together.

It was sweet. The welds were the same, if not neater, than my '91 aluminum frame Mongoose Alta. Even with a cheap Suntour suspension fork, the overall bicycle was light. Plenty light. The chain was lightly lubed with clear oil and all the gears shifted just fine, straight out of the box. 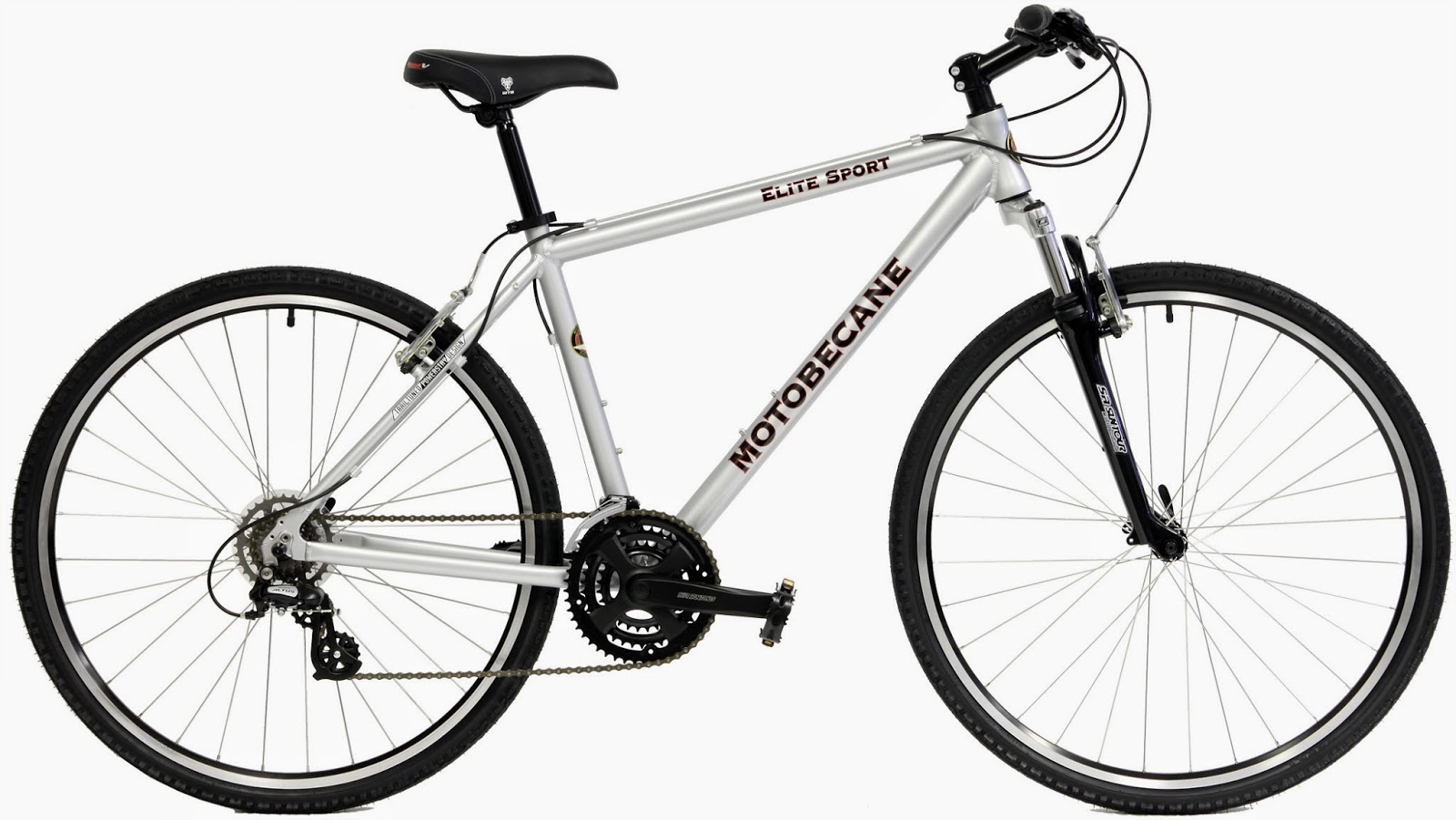 Always There Are Caveats
There is this to know: The seat post was crap. Total crap. The Tecktro Brakes were marginal, at best. The suspension fork I cannot comment on, because suspension forks are totally alien to me. But when I took the test ride, thirty minutes after opening the box, I was flying in slow traffic like a Quicksilver remake was in the offing and it was really cool how the nose dived when you put on the front brake. I shifted through all the front derailleur gears and all the rear ones too. I didn't cross-chain anything because that ain't my way and everything worked just fine. I would buy one of these bicycles, I think, except that this was the lowest-end offering in the Motobecane Elite series...and I don't ride hybrids.

At least, not yet. This bicycle was plenty quick and the Altus rear unit and the Tourney front was a bit rough, but still serviceable. With the little riding that Cromwell does, it may be years before this new drive train breaks in and smooths out. With me, not so long. If that bicycle I assembled this afternoon were mine, she would be seeing thirty miles by sundown and probably a bicycle sick-day tomorrow. I haven't ridden to Daytona for a long time now.

Some Days Are Better Than Others
The sun is setting over the yardarm, maybe; at least it would be if I were on my boat and knew what a yardarm was. Since I ain't and I don't, what I will do instead is pedal down to the closest House of Spirits and grab some grog. Cheap beer too and here we are, all of us; and here is Miss Daisy and the Love Puppy and here comes sundown and the dogs have a cooling fan to lie in front of; it is a better day, now, for the dogs and not such a bad day for the Trailer Park Cyclist. I got to play the part of the wise old bike guru and the Park work stand got a supporting role; I did something worth doing today and I also was the first person to ride a brand-new bicycle that did its job just fine.