Work Happens
No posts for the last few days because quite frankly, I didn't have anything to say. What has been happening at the World of Whispering Pines Trailer Park is that a flurry of renting has taken place, and as the new Guy In Charge of Getting Trailers Ready To Rent my ass has been hopping around scraping and painting and rigging and fixing and generally doing everything but Riding My Bike, which worked out since the bike has been sitting in the corner for the last month shooting reproachful glances in my direction while I shuffled about trying not to make eye contact while cooking up various schemes to figure out how to dig up the money for my Internet Fantasy orders of bike parts.
But then it happened.
Take My Wife...
Last Christmas this guy came by to look at my 1973 Chevy Step Van. I had reluctantly posted a FOR SALE sign on her along about Thanksgiving time. She has been with me for over twenty years, the source of many stories and adventures and mishaps that would require a whole other Blog to get it all down. She was my loyal Big Truck when loyal friends were scarce, and the Party Truck On the Beach when money (and friends) were all around. You get the picture. But These Are Hard Times, and so...
Horatio Alger Lives
This Guy shows up at Christmas Eve to ask about the truck for sale and I walk him through it, give him the old blah blah blah but I was far more interested in his story. For whatever reason, this perfectly respectable guy, with no criminal record or other qualifying background story found himself unemployed, he and his family down and out, foreclosed, despairing and looking for hope. One day he gets on his old Beach Cruiser bicycle and rides around the suburb he lived in knocking on doors, offering to pull weeds for $8 per hour. Within days he had so much work that he had to go by the Goodwill and pick up two more bikes for the helpers  he hired to help in this previously undiscovered service industry. After a few weeks, he bought an old mini van and two beat up lawn mowers and things took off from there.
Now here he was on my trailer step wanting to buy me Old Darlin'.
Tim Joe Super Salesman
“Well”, I said, “I'm asking $2000 because this truck is a classic. Hell, the aluminum body is worth that much as scrap. But selling the body of this truck for scrap would be like skinning my dog to make a fur coat. And after hearing your story I gotta tell ya, you can have her for $1800.”
“Well”, he said, “I don't have the money now. But when I get my tax return check, if it's still here, I'll come get it.”
Trailer Parks Don't Do Layaway
Now I didn't want to sell this truck. But it was Christmas Eve and a few hundred dollars would have put smiles on a lot of faces if I could have hustled around buying These Things To Wrap Up and These Things To Cook and This Stuff To Drink...but here this joker is shopping around and asking for some kind of Trailer Park layaway program...
“Well, whatever, man. Yeah, I doubt if it will still be here or if any of us will still be alive by Spring but if it is still here come on by.”    WTF, I thought, using texting symbols instead of the actual phrase because it was, after all, the Eve of the Birth of Our Lord.
But Then...
Then a couple weeks ago, There He Was.  (Weed Puller Guy, not Our Lord)   He wasn't exactly standing out front waving his tax check in the air, but that is how I will always remember it. I had taken down the FOR SALE signs weeks before after Miss Daisy the Yellow Dog attacked a dignified Spanish gentleman who she mistook for a Mexican fur skinner. I never will understand that dog.
What could I do? The guy's persistence was impressive. That's a lot of weed pulling. And he meant business. We went to the bank and Did the Deed and a little while later, there was an Empty Place In the Parking Lot, A Hole In My Heart and A Bulge In My Pocket.
Hey Sailor...
And so: Parts Ordering! Yee-Ha!
Now I would love to report that I blew the whole wad on some wild orgy of bicycle porn and internet clicking and credit card number typing but.. No. There were too many other Past Dues To Pay to allow for that, as well as my desire to not do that Drunk Sailor thing I'm so good at...but I did indeed reap a Park PCS-9 Work Stand, a bad-ass Mavic Open Sport Rear Wheel with Tiagra Hub, new gears and chain, some cone wrenches and a DT Swiss spoke wrench that I am wearing on a string around my neck because it is That Cool.
These goodies came in by Fedex and UPS last Friday. When one of those Big Trucks pull into the Whispering Pines Trailer Park, heads poke out of doors and sometimes people step outside Just In Case.   But this time, it is all about Old Tim Joe the Fix-It Guy, it is all about Bicycle Parts and It Is All About getting back to flying down country roads on my Old Schwinn.
Next: Explaining the furniture at the curb and the bicycle shop in the living room. 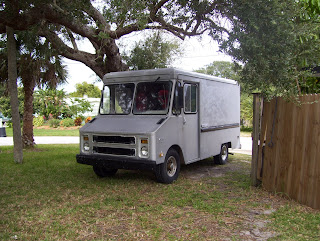