Can't Take My Eyes Off Of You
It was a work day but I was late getting to the truck. While making coffee I was looking at the bike in the work stand. Before I took Miss Daisy outside for her morning routine I looked at the Bike In The Work Stand. When we came back in, I did not look at the BITWS.   Instead, I looked at the brand new shiny Mavic Open Sport Wheel sitting on the kitchen table. I looked at the Beautifully Black new Kenda Kwest 700c tire laying next to it. “Well,” I thought to myself, “Maybe after work we can find out.”

Find out what, You ask? Simple.

It's A Jungle Out There
Like many of my cycling brethren, I spend a whole lot of my free time on my bicycle. Also like my cycling brethren, I spend an equal-to-or-more amount of time reading about bicycling, cyclists, bicycles and bicycle parts. The Internet does not disappoint: There is no end of info out there, as well as stunning pictures, Witty and Well Written Blogs (ahem) and FORUMS where, well, one can find oneself cycling in circles looking for information or entertainment or even a good old fashioned virtual fist fight of words and opinions.


Look Before You Leap
This means before the Neophyte Bicycle Repairman starts any project, he or she will spend countless hours researching each part and technique. I know I certainly do. As the proud owner of an old Schwinn I am actually forced to do extra homework before starting any repair or ordering any parts because there is a very good chance that New Parts Will Not Fit Old Bikes. This can be pretty damn stressful and confusing. There are a lot of opinions out there and I suspect some of them were written by somebody who has never even ridden a bicycle.


WWSD?
There is one wise old guru who can be reliably turned to in times of need. Let's All Say It Together: Sheldon Brown. Anyone searching for answers to just about any question related to Bicycles can usually get what they need from Sheldon. He is no longer with us, but His Words Live On and I honestly can say that any query I have sent spinning out into the ether has usually come back answered in an article by SB. In particular, Sheldon is A Friend of the RetroGrouch. If you ride a Bicycle that is more than six-months old, sooner or later you will be called Retro-Something-Or-Other. I consider it a badge of honor. 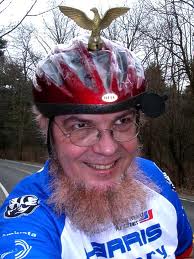 Meanwhile, Back At the Kitchen Table...
Standing there sipping my morning coffee, I look at the Mavic Open Sport Wheel. It is a product of Dimension, (whoever they are) but it consists of a 700c Mavic Double Wall Rim, DT Swiss 2.0 spokes, and a Shimano Tiagra Rear Hub. OK. I look out the open door of the trailer. There's my little work van. As the Head (only) Big Man In Charge of Fix-It at Whispering Pines Trailer Park, my morning commute consists of starting the truck and driving around the block to whatever unit I am currently attempting to save from imminent recycling. So, there's a little time...

All Long Journeys Begin With the First Pedal Stroke
I put down the coffee cup, walk briskly to my makeshift work bench and grab the inner tube I had ordered along with the rest of the goodies. When I first Saw the Light and started fixing my own flats instead of driving my bicycle in my car to the LBS to be repaired, even tube patches were a challenge. But now I'm good at it. But this new tube had a Presta valve. I had only seen these in pictures and on other bikes. They're skinny, rather effete Euro-looking devices, not like the manly, stout All American Schrader valves that are Just Like the Ones On My Manly Truck (a 1999 Chrysler mini-van). I just knew there would be a glitch of learning in there somewhere. But I Am Brave, and I forged ahead. I opened the box.
Ok, then, it's just an inner tube. But look, the valve is threaded and there's a nut on it. Hmm, well, does the nut go inside the rim or outside? If I put it inside it's gonna leave a bulge or something...Outside!
This is gonna be a long morning, said the Voice.

I take my shiny new Topeak Road Master Blaster Frame Pump and place the head on the valve to give the tube a few quick puffs for installation purposes. Nothing. Now, this pump got Good Reviews on the forums. The word Excellent was even used. So chances are it's not the pump. There's something about this Frenchy valve I'm not doing right. Damn Socialist Coalition Dodging...

WWSD? asked the Voice. He gets real talky when I'm working on bikes.
Groovin' Up Slowly
I look over at the computer. It was just sitting there. I look at the clock. Late for work. But I am more-or-less-self-employed here at Whispering Pines, just like I was more-or-less self-unemployed before I got here. So I can steal an hour.
I unlock the head of the pump and give that valve a real close look. Damn it's funny looking. What's this little knob on the end? I'm afraid to touch it. A friend once described my bike repair skills as “A gorilla doing brain surgery with safe cracking tools.” I have an uncanny knack for breaking things just by being in the same room with them. But how else are you gonna learn? I tentatively touch the little knob. It is knurled, obviously meant to be turned. But which way? Damn Frenchys! I hold it between my thumb and forefinger and give a little twist. It loosens. Encouraged, I twist some more, It comes loose and I instantly spring into my “Where did it go?” position of alertness, like a cat chasing a grasshopper, having become accustomed to losing tiny parts that suddenly Sproing away when freed. But the little knob did not leap away Never To Be Seen Again. It just dangled there on the end of a really tiny little threaded rod. I had no idea what was happening. How the hell was I supposed to clamp that pump onto that wobbly little thing without something snapping off?
Trailer Park Units Of Measure
You probably think that this  is way to much anxiety over the simple act of inflating a bicycle inner tube. But I'm Poor. That tube cost five bucks or so, and that is roughly the equivalent of a six pack of cheap beer. If any part gets damaged,  not only do I not have that part,  I also don't have the beer I could have purchased with the money spent on that part.  It is a complicated formula.   So I don't take these things lightly.
Talk Dirty To Me
I carefully slip the head of the pump over the dangly-fragile valve stem and wiggle it a little to get it up in there. I have already reconciled myself to breaking off the stupid little knob. I'm just hoping and praying to Sheldon that the stupid little knob won't get lodged in the head of the pump creating a Perfecta of Loss, the dreaded Two-fer. I carefully flip the lock lever. OK, then...I slowly pump the handle, keeping a grip on the interface of stem and pump head to avoid wobbling or slippage or any of the plethora of calamities that typically accompany my “repairs.” This is all so new to me that I don't even know if I'm pumping it correctly. And those of you who have noticed the vaguely sexual connotations of this process would be laughing indeed if you were there to witness the way I was holding the pump and jacking, uh, pulling, oh, hell, operating the pump.
Much to my surprise, it worked. The action of this Topeak Frame Pump was as smooth as promised. Any person who works with tools knows the difference between the feel of the Real Deal and that crap they sell at Big Box Stores. With just a few strokes (giggle) I had pressurized the tube to the barely aroused (Haw Haw!) state that would enable me to put the tube inside the new tire and mount it (ROFLMO!) on the rim. This was real progress!

Screw Trailers. I'm A Bicycle Repair Man!
Bold talk indeed but bold words sometimes precede bold action. But the truth is, Right Here and Now I keep a tin roof over my head by ripping apart dilapidated old mobile homes and putting them back together in a Craftsman-Like Manner. So I carefully, Very Carefully, unlocked the head of the pump and gently wriggled it loose from the Valve Stem. I turned the little knob The Other Way and it seated itself back into the valve like it was meant to be there, which it was. “Who the hell thought that one up”, I wondered. Oh well, it worked. And Speaking of Work, it was time to go.
I wanted to carry the little Topeak around with me all day but tearing apart old trailers is rough work, not a place for precision-built Bicycle Gear. I looked longingly at the Mavic Wheel and the Kenda tire. “I'll be back later,"  I said.

Next Time: The Mysteries of Overlock Nut Dimension, Cone Adjustment & and Why Did My Derailleur Just Explode?

Posted by Tim Joe Comstock at 9:09 AM